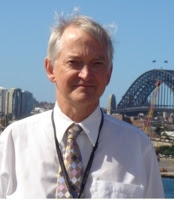 Dr Alan Theobald has joined the AADI Defence Team as an Associate.
Dr Theobald was born in England and holds a Ph.D in Atmospheric Physics from Southampton University. Starting his Defence career at the Admiralty Underwater Weapons Establishment in the UK, he worked on magnetic and electric signature analysis and modelling and degaussing algorithms. This work led to the current generation of significantly simpler magnetic ranges compared to what were available hitherto.

In 1990 he emigrated to Australia, where he became the laboratory manager for DSTO in Sydney, with research management responsibility covering all of DSTO’s program in Shallow Water, or Littoral, operations. These topics included mine threat assessment, underwater ranges, mine hunting sonar, operational modelling and concepts, mine sweeping technology, underwater environmental characterization, non-acoustic sensor systems and maritime security.

He was the Chair of the The Technical Cooperation Program (TTCP) Mine Warfare Panel for eight years and represented Australia at NATO on this subject. He was also the Science and Technology Adviser for SEA 1180, the Offshore Combatant Vessel project.

Dr Theobald has numerous contacts within Australia and overseas in the broad area of research into maritime, especially littoral, operations and is internationally acknowledged as an expert on maritime electromagnetics. He has published more than 40 technical reports on the subject of his research, has three international patents related to magnetic signature work and has presented at numerous conferences and training fora.
Career History
-  Chair of the TTCP Mine Warfare Panel
-  Laboratory manager for DSTO in Sydney
-  Research Leader for Shallow Water, or Littoral operations
-  Science and Technology Adviser for SEA 1180, Aust DoD

Email ThisBlogThis!Share to TwitterShare to FacebookShare to Pinterest
Labels: Associates

PAUL BARRATT
Paul Barratt has had over forty years’ experience of policy advising and international negotiations in the areas of defence, foreign relations, international trade and climate change. After completing an honours degree in physics he joined the Department of Defence as a scientific intelligence analyst. He undertook an intensive course at the Australian School of Nuclear Science and Engineering and completed a second degree, in economics and Asian Civilisations. He has been Secretary to the Department of Defence, Secretary to the Federal Department responsible for mining, oil & gas, agriculture, forestry and fisheries, Deputy Secretary of the Foreign Affairs Department and of the Trade Department, Special Trade Representative for North Asia, and Executive Director of Australia’s leading business roundtable. He is now an independent consultant, a director of UNE Foundation and a director of Australia 21 Limited.